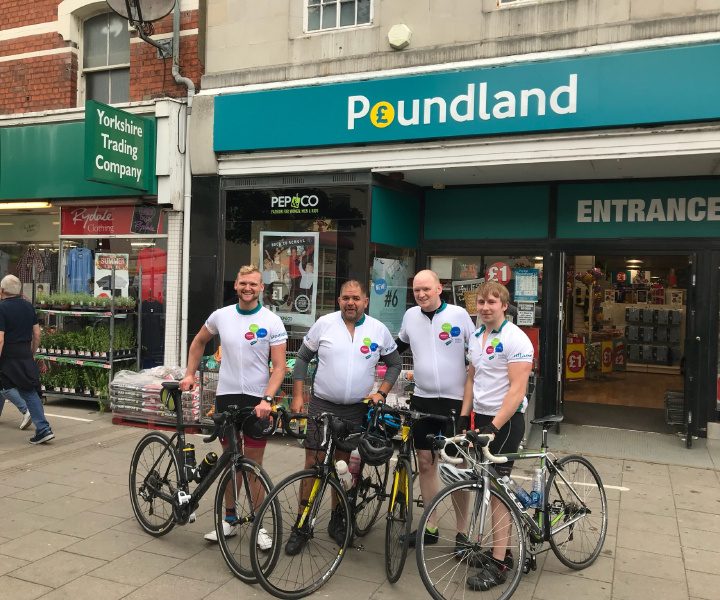 A young fundraiser is feeling accomplished after completing a challenging 68 bike ride from having never even sat on a saddle before.

David Newlove, assistant manager at Prospect Centre’s Poundland, has helped raise hundreds of pounds after cycling from the Hull city centre store to the Poundland in Skegness as part of the retail giant’s Pedalling for Pounds fundraiser.

Martin Davis, operations manager at Prospect Centre, and Scott Carter, supervisor at the centre’s Goldsmiths store, embarked on the challenge alongside David, which saw them tackle a 2,600ft climb and complete the journey in just under five hours.

David, 23, is no stranger to taking on gruelling fundraising challenges after taking on a 650-mile run, which spanned six cities and two continents in nine days, to raise funds for a Sierra Leone-based orphanage.

David said: “Pedalling for Pounds was tougher than I thought, I couldn’t actually walk for a couple of days afterwards.

“Before I did the Hope Alive Tour to Sierra Leone two years ago I had never been on an aeroplane, and up until a few weeks ago I had never ridden a bike, but I knew I was in safe hands with Martin and Scott who are both avid cyclers.

“It was a great feeling when we arrived at the Skegness store and I would like to say a huge thank you to everyone who has supported us to raise money for this fantastic cause.”

Pedalling for Pounds is a 4500-mile cycle round the coast of the Mainland UK and Ireland. Poundland is looking to raise £100,000 pounds to be split evenly between three charities – Make A Wish, Tommys and Whizz Kidz.

The Prospect Centre trio are three of hundreds getting involved in the 63-day event, which launched on August 1.

Maria Kamper, centre manager, said: “We are all extremely proud of David and his dedication to these challenging fundraisers, he certainly doesn’t do things by halves.

“It is fantastic that shopping centre staff want to support David and see him succeed in his money raising missions.

“I have every confidence Poundland will hit its target and I wish all the other centres that are yet to ride the best of luck.”

For more information or to donate, visit www.justgiving.com/fundraising/p4pounds