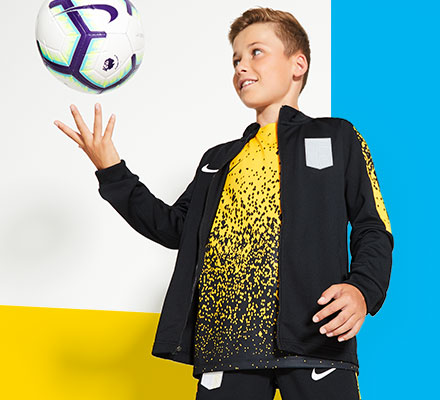 A young competition winner is feeling hopeful for the future of his modelling career after becoming one of the faces of a major sports brand.

The year seven pupil was chosen to be represented by the Chesterfield based agency out of hundreds of hopefuls in the 6-13 age category and within hours of his portfolio going live on the agency’s website Henry was being invited down to castings in London for the likes of Next and DW Sports.

Henry’s mum, Heidi, says she couldn’t believe it when her husband told her he’d walked straight past the life-size billboard of their son outside the Mount Pleasant DW Sports store without even realising it was Henry.

“The whole family are extremely excited for Henry’s future,” Heidi explains. “To be honest I completely forgot we had entered the competition. I was shocked to see Henry had been successful when a friend reminded me to check my emails.”

Henry’s dream has always been to become a professional footballer and has spent the last five years training with Hull City Tigers Advanced Academy & Development, along with Leeds United Development and East Riding Schools.

Heidi added: “Henry was released from the Academy in May and he was keen to get himself into something else. He said I know, I’ll do modelling!  That night, when we got home, we saw an advert for Prospect Centre’s Model Tots to Teens.”

More than 400 hopefuls entered the competition and since winning Henry has been to two castings in London, a photo shoot in Manchester and has another lined up in Burnley for Studio Catalogue.

“He’s an extremely confident young boy and, although there has been a little bit of playful teasing from a few of his peers, the response from friends has been really positive and supportive.

“We are all excited to see where things go from here and Henry is keen to continue working with big brands to earn money for his future.”

Model Tots to Teens will return to Prospect Centre in Spring 2019, although a date has not yet been confirmed.

Maria Kamper, centre manager at Prospect Centre, said: “Everyone at the centre is delighted that Model Tots has led to such success for Henry and I hope his story will inspire more people to enter next year.”

To keep up to date with Prospect Centre’s latest news and events, visit www.prospectshoppingcentre.co.uk or follow @ProspectCentre on Facebook.