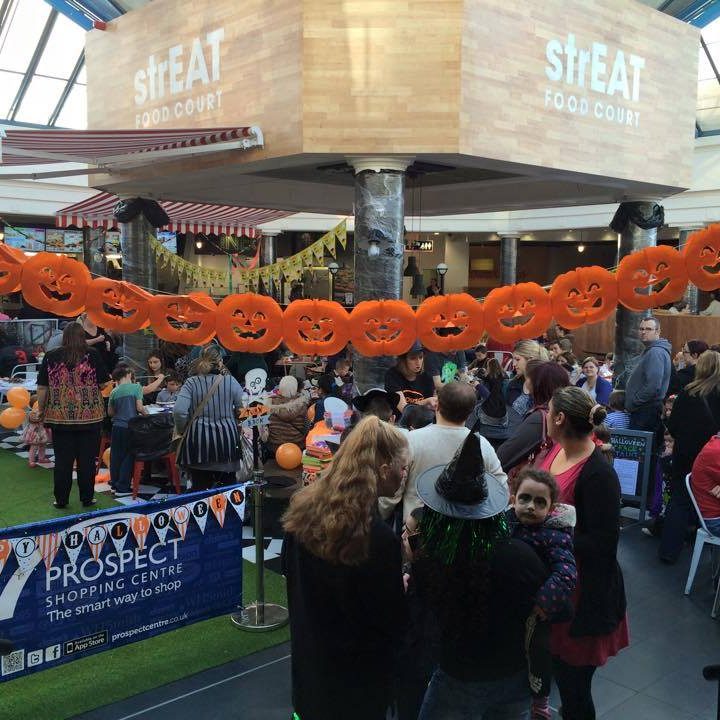 Prospect Shopping Centre is delighted to report a further increase in Halloween footfall figures this year, following from an exceptionally busy day on October 31st.

With in excess of 31,000 visitors to the Centre on the day, footfall increased by 20.2% on the previous week and was 5.5% up on Halloween 2014. With the events hosted in the Centre’s strEAT foodcourt, CPL Foods benefited from a 45% increase in footfall within their demise on the day and 6%increase in sales, with the highest footfall being achieved at 2pm when the event launched.

Nightmare on Prospect Street was launched last year and was hugely successful, resulting in the campaign being shortlisted for a prestigious Purple Apple award.

The year’s series of events, dubbed Nightmare on Prospect Street II, saw the return of our spooktacularly successful Little Pumpkins Party, a free fancy dress party for children of all ages. The trick or treating around the centre and broomstick flying lessons were just some of the afternoon’s key highlights before darkness fell and things got a whole lot more scary.

We wanted to give the student scare-seekers of Hull a truly original experience – one which they wouldn’t find anywhere else in the city. Drawing on our unique status as being one of Hull’s most haunted buildings, we transformed the strEAT foodcourt into an eerie cinema that played back-to-back horror movies after the centre had closed, right through until the witching hour.

The event was extremely popular, with more than 70 students donning freakish fancy dress crossing the threshold over the course of the evening. From the feedback we received, it appears most people had heard about the event through flyers our marketing team handed out at colleges during the morning and lunchtime rush, as well as all the students who received it under their bedroom doors in their halls of residence at the University of Hull. Others mentioned they had seen their friends were attending through the event we set up on Facebook.

Everyone received free popcorn upon entry and was able to relax on giant beanbags as they settled down for the scary screenings, all of which had been voted for by the public in the weeks running up to Halloween on a Facebook poll. The event saw us team up with CPL Foods to offer a series of £10 sharing meal deals in strEAT foodcourt, as well as a KIDS EAT FREE* incentive for children accompanied by an adult purchasing a full price meal.

It was an action packed day to say the least and we are already gathering very positive feedback from retailers, who noticed how busy their stores were as a result of the Halloween events!